I cannot believe that this is my first blog post of 2018! Where has all the time gone?

Such a lot has happened over the last few months that I hardly know where to begin. 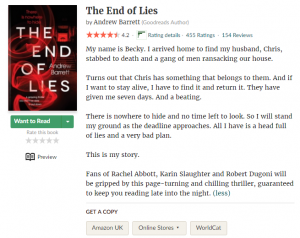 The End of Lies, over three months since its release, continues to do well. On Goodreads it has 455 ratings and 154 reviews with an average of 4.2, and in the US the latest of its 144 reviews says, “This is one of the best psychological thrillers I’ve ever read”. UK and US readers have given The End of Lies a 4.6 and 4.7 average.

March is survey month for the thousands of readers on my newsletter – and one of the questions on there was ‘Would you like to see more stand-alone thrillers?’ 80% said they would, and I think a lot of that enthusiasm comes from The End of Lies.

So guess what I’ll be writing sometime this year? I have an idea in mind for a cracking standalone thriller, so I can’t wait to begin that.

Of course I’m still engrossed with CSI Eddie Collins new book, The Death of Jessica Ripley. It’s coming along well, but a little too slowly for my liking – and too slowly for many Eddie supporters too! There are two reasons for this:

I’m trialling Scrivener again. This is the third and most serious attempt to get to grips with this new (to me) writing software so far. I first tried it out five years ago and threw it in the bin. I then tried it out while writing Ledston Luck and couldn’t get to grips with it. Learning it was such a slog that it was beginning to interfere in a big way with my writing – so it hit the bin again.

Now though… well, I began Jessica Ripley almost a year ago but took time away from it to write The End of Lies and to work on some other projects*. When I’m away from a book it takes me a while to get back into it again, and feel its rhythm once more. And so I thought I’d re-learn the book as I got to grips with Scrivener. So far so good. The important thing is that I’m getting back on the horse and getting comfy in the saddle. Me and the new book are still getting acquainted again, but were walking, and I think pretty soon we’ll be galloping.

*And the second reason The Death of Jessica Ripley has taken a back seat recently is that Bloodhound Books have signed all four of CSI Eddie Collins’s books! That is massive news, and I’m very grateful to Betsy Reavley from BHB who has been really supportive of the transition so far. Part of that transition involved trimming The Third Rule a little more just to make sure it was as lean and mean as I could get it. The books are winging their way to an editor right now.

Pretty soon they will all have new covers and some of them will even have new titles.

I hope Bloodhound enjoys The Death of Jessica Ripley, and I hope you do too!

So this year will continue to be mega busy for me: re-editing all of Eddie’s old books; finishing a new one; hopefully writing a new standalone; and I also want to continue my new tradition of writing a short story each year to go with Eddie’s new novel.

There is also the chance of a fourth SOCO Roger Conniston book on the horizon. One of my closest friends on my Facebook Advance Reader Team (take a bow, Rudi) has suggested the story is not quite over. He thinks Chamberlain didn’t get what he deserved, that he walked from his immoral actions without punishment. What do you think? Should Chamberlain be made to answer for his actions?

Speaking of SOCO Roger Conniston books. I’ve enrolled them in Kindle Unlimited for a while. So if you’re a member 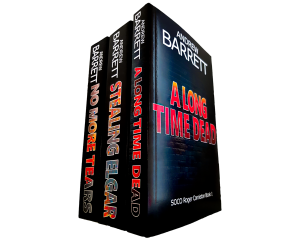 of KU you can get Stealing Elgar and No More Tears for free as part of your monthly subscription. Of course, you’ll already have A Long Time Dead for free anyway – if not, click here. As an aside, The End of Lies is also in Kindle Unlimited.

Stealing Elgar and No more Tears are now only available at Amazon.

I’m enjoying some great interaction with readers over on the ART page (click here to go there and sign up); it’s quite busy and it’s lots of fun, and very friendly. Pop along and see for yourself. And people are contacting me on the website too:

If you have an image for inclusion on the site, click photos@andrewbarrett.co.uk

If you have a sub-1000-word story for the site, click stories@andrewbarrett.co.uk

As always, you can reach me at andrew@andrewbarrett.co.uk