What led you in to writing in the beginning?

A badly written book. I looked left and right, smiled an evil smile and picked up a pen and a jotter. My first attempt at writing was horrific. Truly horrific. But even though it was extremely bad, I had found something I enjoyed doing. I shelved it, and then picked it up again a year or two later.

I found myself shuddering, and once I’d picked myself up off the floor, I discarded it and wrote a new book called Charlotte’s Lodge. I’ll never forget the feeling of euphoria I had at actually finishing a book – a whole book! Me!

Shame this one was horrific too.

I didn’t know it back then though; to me it was wonderful, a definite best-seller. No question about it. Took a lot of years and a lot of ink to realise how bad it actually was. And that’s a good thing; it means I know what ‘good’ is now, and I know how to avoid ‘bad’ (for the most part).

Where did you get the inspiration for the Ledston Luck plot especially the traps issue?

The traps thing was the writer in me struggling for something a bit different. As a CSI, you do need to be aware of traps at some of the more sophisticated cannabis farms we attend. Some are electrical traps, others are sharps traps, and one I recall was a shotgun cartridge beneath a lose floorboard that rested on the point of a nail. No prizes for guessing what would’ve happened if anyone had planted his foot there. The traps thing intrigued me, and I decided to pursue it, and include it in the book.

The inspiration for Ledston Luck? Two things hit me over the space of a few weeks. I pictured a strange woman sitting naked in her kitchen, no lights on. Two burglars enter, and she reaches for a Purdy shotgun. I wrote that one scene, and aside from a few small details, that exact scene is in the book now. She later became Divine Wright, and grew into a fairly good character. I had intended writing her as a maniac, a really strange serial killer*, but I couldn’t get my head inside hers without thinking there was a damned good reason for the things she did. She wasn’t just a ‘serial killer’ – no-one’s ‘just’ a serial killer. Took me a long time, well over half the book, before I understood her. And that’s when I came up with her backstory. Once I had that, the book wrote itself. Up to that point, I wrote each word with a shaky kind of caution; I didn’t know where this damned book was going, if it would grow legs and walk by itself, or if it would keel over and die. Luckily, it walked. Then it ran. 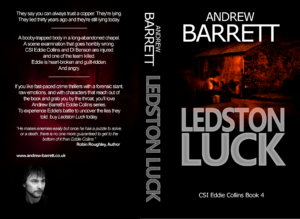 The next thing I saw as I was being driven over a river bridge in Woodlesford in the rain, was a woman’s face just beneath the rippling surface, tree branches swaying across the water.

Don’t worry, there was no woman (I hope!). But I imagined there was. The next bridge we crossed was the canal bridge. And I thought it would be a much better place to hide a body, less likely to float and go bobbing along down the river.

I kinda like the idea of the murderer being a woman. A psychopath or sociopath. I can see her befriending the dog that barks incessantly and torturing it to death. I can see a lot of pets disappearing in LL. And then I can see people disappearing too. Of course, the pets’ thing must be back story, and I don’t yet know how to feed that into the book. I need to know what makes a woman like this kill: is there a trigger, or is it random, or is it targeted.

I like the fact that she lives in the village all her life and has been overlooked as a suspect by the police several times, hiding behind her frailty and her ignorance. I would like MCU to bring in a psychologist to work this thing out. She would be Eddie’s ‘love’ interest. Of course he doesn’t want to know her at the beginning (keeps calling her Cracker), and then maybe he gets her, and likes her. He takes her home to meet Charles, and she laughs at his Dad or something, and that puts him right off her.

I want her to be a victim – totally unexpectedly – of the LL curse, maybe this death is the one big mistake that Eddie makes. Also, how about we steer the reader into thinking the killer is A when in fact it’s B – this could roll onto another book.

Ledston Luck is a real place. What drew you to write a book about it?

I had two scenes and a trap fetish. Now I had to make a story. And the setting for that story was one of two places with idyllic (?) names – each captivated me: Monk Fryston, and Ledston Luck. I had cause to go to Ledston Luck and I discovered just how strange it was. There really is just one street, maybe two hundred yards long with a row of terraced houses on each side. No shops. No church. No pub. A real pit village. Magical. So Ledston Luck won. I chose to weave a little bit of Ledston Luck’s past and location into the story just to add a bit of flavour. It had a pit that closed in the 80s, and it was out in the sticks. Perfect.

Can I ask why you chose to write about a CSI (as opposed to a detective?) Good idea I think as it puts a different slant on things but interested in your perspective.

You’ve answered the question, Nicki. It was a different slant in the crime genre. There aren’t too many crime fiction writers out there whose central character is a CSI. But throw a stone and you’ll hit a DI square on the forehead every time. Also, because I’m a CSI too, it makes life a bit easier – I can have Eddie Collins say what I’d love to say (mostly), and I know how to run a scene and what kind of things we can get from a scene, how evidence can lead an investigation. Apart from Eddie taking off and pursuing the investigation himself, it’s as life-like as you can get [Though if pressed, I shall deny everything: nope, no one ever swears or argues, and life is bliss all the time].

How do you chose your place and character names?

I grew up in Woodlesford, which is why it gets mentioned so often in my books. The whole of south east Leeds is my playground – and it’s in my patch so I know it fairly well. We’ve talked about Ledston Luck, but here are other place names that hold wonder to me. Near Towton (there was a very famous battle there a few hundred years ago) there’s a place called Saxton. It was nearby that I first saw the chapel that appears in Ledston Luck. Its slap bang in the middle of a field. Nothing around it for miles except a pub called The Crooked Billet. Wonderful place and I had to have it as my chapel in the book.

Character names aren’t there by chance either. Eddie Collins: two pairs of syllables that roll easily off the tongue. And who doesn’t like the friendly name, Eddie? Everyone likes an Eddie. His surname comes from the dictionary I had at my side back in 2004 when I first created him.

Divine Wright was going to be Divine Hamilton. I thought I’d add a bit of religious fanaticism in Ledston Luck by having her mother (also given the old and stern-sounding name of Lizbeth) Christen her Divine – and with the surname of Wright, it fitted nicely.

Other than that, my chosen character names have to fit inside the time period they were born in, and perhaps within the social structure you might expect them to inhabit – or the total opposite.

Where would be your prefect place to write (real or not!)?

Eddie’s lounge. It’s way out in the sticks so no noisy neighbours. It’s a bungalow cottage so there’s no one upstairs (or downstairs) banging around, and it has a window seat that looks out onto the countryside. I’ve never been one for writing in coffee shops, I like peace and quiet and no distractions, and I’ve never felt the need to write outside. I like being inside my own little bubble where I can live in my book.

Outside of writing- what do you do to relax?

There isn’t an ‘outside of writing’.

I used to tinker with my old Capri, building and polishing engines for it (I used to build engines for a living), but I sold the ol’ gal. I draw pictures now and then, but right now there’s nothing outside of writing that I want to do. Of course I have family; I have Sarah and our little daughter, Ellie, and I work up to 60 hours a week, so there’s often not much time for anything really. But when there is, I’ll be here at this keyboard.

Last but not least- your favourite author and book (not necessarily the same!) please.

Don’t hate me, but I can’t answer this. I have a long list of favourite authors and massive list of books that I lust over. I mostly enjoy the crime genre, but I like horror too.

I hope you enjoyed this interview. I certainly did. And you can find it here on Nicki’s Blog. And here’s a link to the blog page itself. Happy reading!