The Story of Sword of Damocles

I’d love to say that Sword of Damocles was an easy book to write, or that it flowed effortlessly from my pen. It didn’t. It was a pig to write. 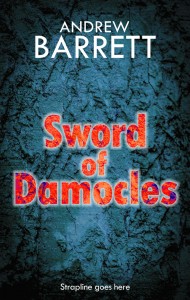 Many years ago, I became half of a fairly successful writing partnership with a close friend at work, Graeme Bottomley. Together, over six or seven years, we wrote four two-hour scripts for ITV’s Yorkshire Television. Indeed, they paid us to do it! Because of the severe financial climate back them in 2005, ITV decided they would close Yorkshire Television’s drama department with the exception of their long running show, Emmerdale. We were very slightly gutted.

Of the four scripts, we’d written one called Sword of Damocles (can you see where this is heading yet?), and it was my favourite. Since I’ve headed this post with the word ‘spoiler’, I feel okay about telling you that behind the scenes lurks the infamous serial killer, Peter Sutcliffe – dubbed The Yorkshire Ripper. He doesn’t play any part in the story as such; he’s mentioned, and his particularly brutal way of killing his victims is described and used by one of the characters. It’s basically a book featuring a copycat killer, and it’s about revenge, and long-held secrets. It’s also, more importantly, about how Eddie sees through the veil of deceit, created by two very bad men.

They would have got away with their crime and their secret but for one thing (well, two actually): greed. The second thing they didn’t bank on was a grumpy CSI called Eddie Collins. 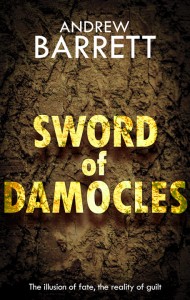 Why was it a pig to write? The scripts had a chap called Roger Conniston at their centre. He was the SOCO who worked out the whole shaboodle (as Eddie does now), and he had a story of his own, just as Eddie does. But Roger and Eddie’s stories, though similar, were in very different places at the time of writing the book compared to where they were when we wrote the script. So I dissected the story-only scenes from the script and welded them into the Eddie-only story in the book. Inside you’ll find a continuation of Eddie’s life, beginning where we left off in Black by Rose with him working in the Major Crime Unit’s CSI department, and on a personal basis, with Eddie being in love with Ros. This idyllic situation doesn’t last long though – and really, when you’re writing a book, ‘idyllic’ is the death knell – you need change (something I hate).

Getting the script into novel form was, eventually, a successful marriage, but it was still hell to write. A script is either action or it’s dialogue. There is no prose, there is no interior monologue. Black and white. A book is so much more; it has to express to the reader what the characters are feeling, thinking, as well as doing and saying. So fleshing out the script with prose was a major task, much more involved than writing a book from scratch.

As usual, there are several sub-plots running through the book, not least of which is Eddie’s estranged father, Charles. Charles is burgled and beaten, and practically made homeless. Eventually he tracks Eddie down, and Eddie invites him to stay. But that’s not the end of their story. Eddie can’t rest until the wrong done to his father is righted.

Sword of Damocles is still a favourite of mine – in both formats. And I’m constantly humbled by people’s comments regarding the revelation on the last page. It’s rather spectacular, and extremely emotional. Some readers have said they wept. And that pleases me. I’m not a sadist, I just love it when words can pull that kind of empathy from people. No greater compliment for a writer.

And here’s the blurb.

When the remains of a woman are found in a burnt-out car, CSI Eddie Collins teams up with his enemy, DI Benson, to untangle the knot of lies behind this apparent suicide.

As a CSI in the Major Crime Unit, Eddie is forced to lead a disintegrating team that he can’t control or tolerate, as they go up against a killer who will do anything to protect his past, and profit from it.

Solving the problem is difficult enough, proving it is deadly. 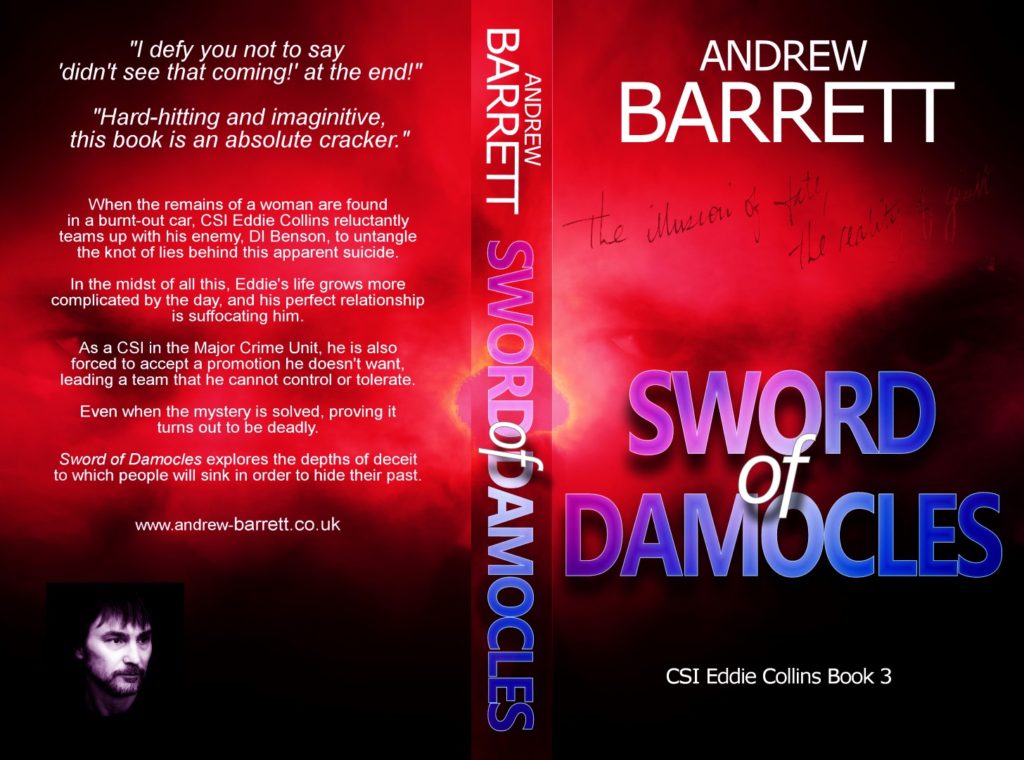 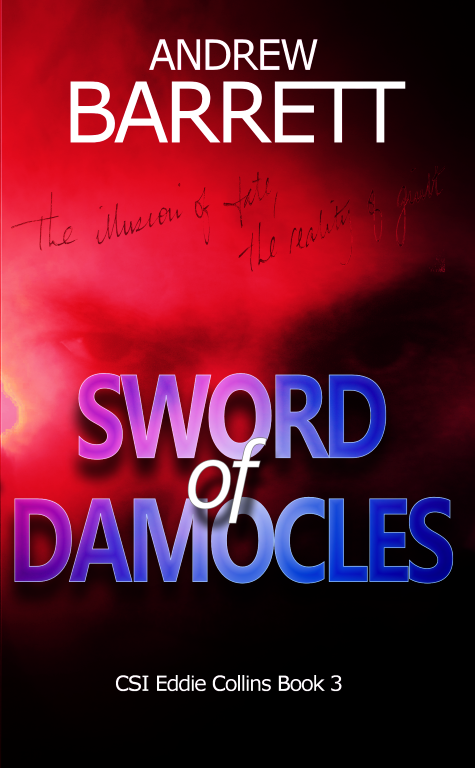