The Story of Stealing Elgar

I’ve just found the very first attempt at creating a cover for Stealing Elgar back in 2011 when I was getting ready to upload the book to Amazon. Looks like I missed an opportunity at becoming a pro book cover designer, doesn’t it?

I began writing Stealing Elgar only a few months after finishing A Long Time Dead and if I remember correctly, it took about 14 months to complete. Certain aspects of it are loosely based on some real events that happened in parts of England around that time; namely the Russian Mafia sting. I genuinely don’t know now, nor knew back then, any details of it; but those three words ‘Russian Mafia sting’ caused me to put pen to paper.

In the book, the actual sting isn’t shown, just its aftermath, but it was the impetus that got me going into a dark world that normal people know nothing of.

Stealing Elgar strongly features weapons – something I enjoy reading about, and it was something I enjoyed writing about too – and of course the people who use them. I was fascinated also by the Irish terrorist angle that, behind the scenes, played a big part in Hades’ story. Hades is our antagonist, and he’s an ex-bare-knuckle fighter with a bad reputation. He was Roger’s nemesis and a formidable enemy; not frightened of playing with the big boys: the Irish terrorists, the Russian Mafia, or the police. He wasn’t frightened of the police because for the most part, he knew what they were up to, since his brother, and arms supplier, Inspector Weston worked for them.

I touched on the subject in ‘The Story of A Long Time Dead’, but another reason why Stealing Elgar is my favourite book is that it is the first book in the trilogy where I really found my style of writing. As I said, Dead was a little clunky in places, but Elgar seemed to flow. A lot

of that clunkiness was down to nothing more than nerves, maybe a lack of confidence too. Well, in Elgar, I distinctly remember saying ‘sod it, I’m going to write how I want to write’. A good move, since it’s impossible to please everyone.

Elgar is hugely complex, but not at all, I think, complicated. In other words, there’s a hell of a lot going on, but it all makes sense. This is the

one book that I would dearly love to see made into a movie. I suppose everyone says that about their books, but for me this has everything. It has compelling characters, it has suspense (especially at the Irish scenes), it has action aplenty in the form of shoot-outs and explosions galore. But most of all, it is bursting with emotion, something that translates especially well to the big screen.

Roger Conniston is a newly promoted Senior Scenes of Crime Officer with a lot to prove and a lot to protect. He’s up against an ex-bare-knuckle fighter called Hades who is planning the most audacious robbery in England’s history.

For Hades, the success of this ‘one last job’ is paramount. He’s planned it in meticulous detail, from the explosive diversions that will shock the nation, to the selection of his team and the weapons they’ll use.

Roger is faced with a decision: continue working with the police and put faith in the flawed investigative skills of DCI Chamberlain, or cut the ties and venture out alone to stop Hades and secure everything he cares about.

Stealing Elgar shows how two opposites engage the same problem; how they battle their way through conflicting interests to reach – or destroy – their goal, and asks which is more important: family or pride? 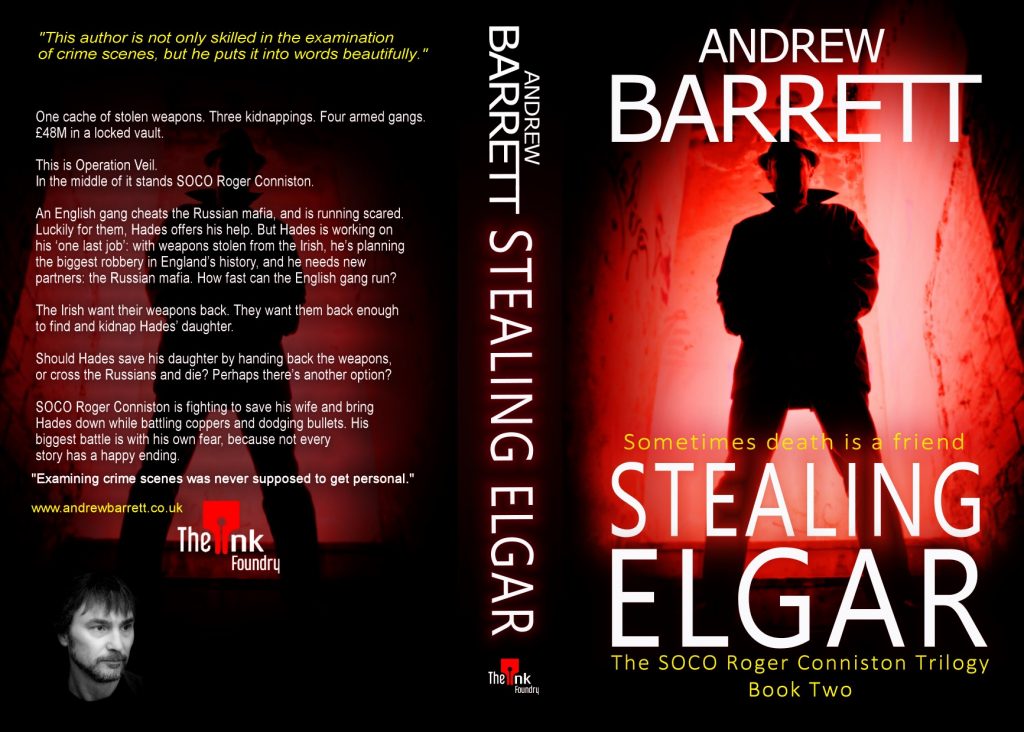 Available only from Amazon
FREE on Kindle Unlimited