The Story of The Death of Jessica Ripley

Andy Barrett, you know how to snatch the breath from a reader’s chest.

This is part two of the Ripley story. Part one was a blog post I wrote in April. You can see that here – it deals with how I began writing The Death of Jessica Ripley, and where.

This is why writing The Death of Jessica Ripley hurt so much – and it did, physically as well as mentally.

This has to be one of the best and most original crime thrillers that I have read.

Jessy’s old lover, Tony, joins her when she’s released from prison, and as you know, he killed her old solicitor, the one who was utterly useless in her defence. This was the start of the problem, really. Why the hell did he do it? And why wait till she was released? I could have back-tracked and had Jess kill him, but the way he died suggested it should be a male who killed him (Jessica’s not strong enough to wield a pick axe). So I had some pretty detailed work to do to get it right and be consistent all the way through the book. 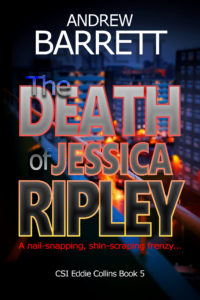 I liked writing Tony; I liked that he was a tramp – which he turned out not to be. I think he was with her when she was released because he felt guilty for the first murder and perhaps for the second also. But when he found out she wanted retribution, he was there to encourage her. I also wonder if he was there to finish her off. I didn’t write any of it, but he was in the pay of Stanley and Valentine, remember, and they wanted her son. Jessy had already turned down £50k for him, so perhaps her days were numbered anyway.

The Death of Jessica Ripley starts at 100 mph and then speeds up!

Back to Tony. Of course, Jessy finds out that Tony also killed her ex – the one she’d been to prison for. This was the first twist of the story. But it didn’t work. Why would he do it and then leave her to take the blame? Coming up with the reason he’d do this was hell on earth, but I think I managed it – and in the end it coupled up nicely with her son, Michael, and his ‘new’ family. If all of these story lines are why it was hell on earth to write, you can see that all of these story lines made it interesting too; they made it a whole lot less predictable than it otherwise might have been. Readers love unpredictable stories. 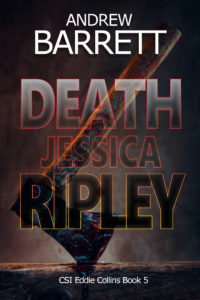 I hope that throughout the book you see Jessy’s mental state deteriorate. And that deterioration stemmed from Michael’s initial rebuffal of her. I felt genuinely sorry for her, but of course it lent impetus to the story, so I wasn’t going to give her an easy ride. In fact, I gave her a horrible existence thanks to Sidmouth. What a piece of work he was. His death, and his mother’s, was something I’d wanted right from their very first meeting. Initially it would throw the police off track, because he wasn’t one of the group responsible for her prison sentence. But once they figured out she was his client, the penny dropped.

Yes, it dropped. But not for Eddie. I wanted him to be wrong. In all the stories I read, the protagonist is bang on right every single time; I hold my hands up to making Eddie pretty good at solving things. I wanted to buck that trend. I wanted him to be so wrong that it had severe consequences for someone – and it did, poor old Jeffery. Just this aspect of the story – Eddie thinking the killer was Tony, and Benson insisting it was Ripley – was a bugger to write because it went against how I would normally do it: Eddie’s instinct pulling out the right answer, and I had to correct my own errors several times.

You want another example of why it’s sometimes hell writing a book without a plan in mind? Easy. Troy – his drug addiction. Initially, Eddie’s little ‘chat’ in his office was going to be an end to that story line. But my silly head wouldn’t let it go, and the drugs thing rolled on until it became very serious indeed. In fact, it became one of the centre-pieces of the story along with Nicki’s blind ambition. I was wholly reluctant to have Nicki take over Eddie’s office – surely it couldn’t happen. Well, I convinced myself that it could under the right circumstances – and those circumstances presented themselves as her father, the head of MCU.

In the initial draft of the story, when Troy pushes Nicki off the external walkway on the tower block, she pulls him with her and they both die. I loved writing that scene. But I thought about it for weeks, and one of the reasons I couldn’t get past this stage was: what the hell was their input into the story? None. Ultimately, their presence in the story changed nothing – they had no effect. The only way I could think of to make the story change by having them in it was for Troy not to die, and for him to go on and create more havoc at the end of the story.

I love books where I can tell that the author had great fun writing it.

Was all of this Eddie’s fault too? The fake drugs test, the mass-walkout? Quite possibly. If he’d handled Troy differently, Nicki might still be alive.

Add to that little lot his initial misinterpretation of Tony’s scene, and you’ve got a superhero who’s not so super anymore. I think – or at least I hope – this makes him more human.

One of the ad images

I wanted Eddie to have the best of intentions throughout the book, and I wanted those intentions aimed in the wrong direction. By the end, Eddie was sick of trying to help people and getting it wrong. Inadvertently he’d caused so much damage and pain that he was in real trouble inside his own mind. I think his only redeeming act was finally sorting out his father’s new love interest – much to Charles’s annoyance.

I wrote myself into so many corners with Ripley that I found it one of the most punishing stories I’ve ever tackled.

Sometimes you can’t forgive and forget.

Jessica Ripley didn’t kill her ex-husband. But everyone thinks she did. After serving twelve years for his murder, it’s time to get her own back on those who put her inside.

During those twelve years, Jessy’s son, Michael, has turned against her. Whatever mercy Jessy had for her intended victims, has gone.

CSI Eddie Collins is having a hard time watching his father enjoying life. He’s also having it tough in the form of two new recruits to his office. One is off his tree on drugs and the other wants his job.

And then the murders begin.

Can Eddie trust the evidence, or is someone out to get even? And who did kill Jessy’s ex? 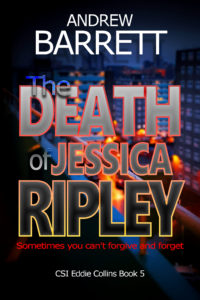