The Story of No More Tears

In interviews and on forums I’ve said how Tears wrote itself. Of course it didn’t; I agonised over this book as much as any other. I think.

The reason I said that is because the opening page of the book is just about the closing page of Elgar. We almost seamlessly merge from one book into the next as though we had simply turned a page. It was the logical thing to do. Elgar ended where Roger had lost everything and he knew who was responsible. We join him in Tears as he’s feeling the agony of loss – something I had not personally experienced when I wrote the book, but I tried my damnedest to really feel what Roger must have been feeling. And I suppose that’s what made the book such a pleasure to write. That’s why it wrote itself, because it was entirely natural.

Tears is a simple revenge story with a forensic angle. But to add some spice, I added a special character called Simpson. He too was out for revenge for the loss of Yvonne. He blamed Roger and he blamed Jess. We see how well he handles Jess, and so we fear for Roger. Prior to meeting Simpson, Jess doesn’t have it all his own way. He has the remnants of Hades’ gang to placate. One of those members is an ex-military man called Troff. I had tremendous fun writing him because he was a free spirit with no loyalty to anyone other than himself, and he ruthlessly exploited that fact.

There are numerous other sub-plots sparking throughout the book:

the police aspect being one of them; Roger’s friendship with DI Shelby being another. But one of the most striking sub-plots is Roger’s emotions. We experience the ups and downs, the reasons for retribution and those for letting sleeping dogs lie. I feel really sorry for the guy, I tossed him some real low-ballers, but I think he came good in the end – which, of course, he had to do.

We also get to see how Hades’ wife lives, and we get a better understanding of the man himself, a career criminal who loved his family from afar, not daring to get too close to them. I had one review on Amazon talking about the killings, and the maimings, and the bent coppers, but the review quite rightly mentioned the friendship I write about, the honour and the abject agony of loss.

And the title? Well it’s two-fold, really. I wanted to get across that, at the beginning of the book, Roger’s resolve had strengthened; he stuck out his chest, dried his eyes, and went after the bad guys. And then, at the end of the story, the tears are finally over and he walks away with his head held high. It’s also the title of an Ozzy Osbourne song and album, the contents of which have no bearing on the story at all, by the way; I just loved it (and still do), for the haunting lyrics and the enormous guitar solo. It seemed appropriate.

There are bad people on both sides of the law; those so hungry for victory that they will crush anyone to achieve it.

SOCO, Roger Conniston, always believed in the law. Not now though. Now he believes only in himself. He has business with people who have no right being alive, and if success costs him everything they left him with, he’ll happily pay. For him, this is a journey into places he didn’t know existed, encountering people so violent and determined that he almost weakens. The question facing Roger is: how far dare you go?

Old enemies – and new ones – backstab and double-cross each other to get to Roger. But among them are those too greedy to realise that gaining their goal will ultimately kill them.

Deceit, friendship, greed, and honour, are all played out in the concluding episode of The Dead Trilogy. 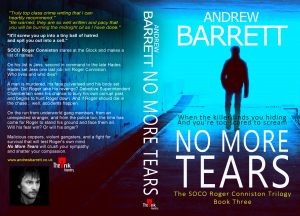 No More Tears on Goodreads

Only available from Amazon
FREE on Kindle Unlimited