The BBC Interviews – February and March 2017

Being interviewed via email is so very easy, and I really enjoy them too! I have time to think about my answers, about how I’d like to come across depending upon the tone of the questions.

But in February, BBC Radio Leeds contacted me and asked if I’d like to do an interview on the radio! No way could I refuse – how often does a request like this land in my inbox? But, if truth be known, I wasn’t looking forward to it. As well as email interviews, I don’t mind one-to-one questioning; in fact I quite enjoy it. But speaking to an audience of thousands on the air! I was petrified.

But then I relaxed a little because it was a pre-recorded interview. I could make as many blunders as I liked and none of them would ever make it out alive. As it turned out, the lady interviewing me, Gayle Lofthouse, was a true professional, and she kept the nerves at bay.

It was a short interview, but I’m very grateful to her and BBC Radio Leeds for the chance to speak with her. 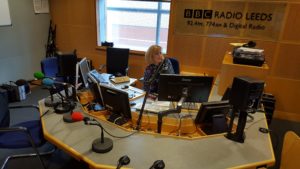 Here’s a link to the Gayle Lofthouse show. I hope you enjoy listening to me squirm!

But if I was petrified by a pre-recorded interview, imagine how I felt when I got an email asking if I’d like to appear on the radio live! Andrew Edwards’s producer contacted me with a view to doing a live interview on the 6th March, for his Book Hour show.

My nervousness steadily increased. And so did the bad case of man-flu I was suffering from too. It became so bad that on the 5th I had to ring and cancel – I could barely speak. All those sweaty palms were for nothing. The BBC though were very understanding, and we re-scheduled the torture for the following Monday – right before I was due to start work. I’d have to take my uniform to the studio with me, and drive like a madman in order to get to work on time.

Bear in mind that I talk gibberish (my lady, Sarah, calls it wobbly-gob!) when I’m under pressure, and you’ll understand why I get so giddy on air during my time there. I was terrified, and sometimes when I’m terrified I’m liable to break out in the odd bout of swearing. And this thought just added to the terror.

I needn’t have worried too much though, as Gayle before him, Andrew was a consummate pro, and he guided me along quite nicely. You might notice that he threw in a low-baller right at the end, and I was flummoxed; couldn’t think straight and so I said the first thing that came to mind, and wish I hadn’t. Tom Cruise? Really? Sorry, Tom. 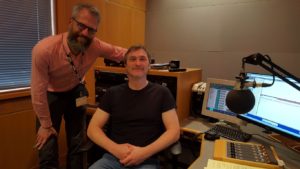 In fact, the interview went so well that, while he was playing some music, Andrew asked if I’d like to extend it. He had a pre-recorded interview with another author lined up, but said he’d play that another day. I’d never get asked this kind of question again, and so I agreed, knowing I was in real danger being late for work.

So the ten minute session turned into twenty-five minutes. But that didn’t make me late for work. What did make me late was that I’d forgotten my boots, and so I had to drive home for them anyway. Tut.

Here’s the link to the Andrew Edwards interview.

Note, these files are very large. Google will not allow you to play them directly, but will give you the option of downloading them to play.