We got drenched at Whitby yesterday, but it didn’t stop us building sandcastles on the deserted beach. Today is beautiful though so I envisage a squelch through the mud in our local woodland.

I have a few items of news for you today that might make for a great weekend if you’re struggling for something to read.

For the first and possibly the last time, I’m promoting CSI Eddie Collins’s first two books simultaneously. So you can get hold of The Third Rule and Black by Rose for 99cents/99pence each at Amazon, Kobo, B&N, and iBooks. That’s a 600-page epic and a detailed 5-star read for less than the price of a coffee. I should point out that this offer won’t be available for long, and it’s unlikely I’ll run it again.

You can get your copies here…

The Third Rule at Amazon US

The Third Rule at Amazon UK

The Third Rule at Amazon worldwide

The Third Rule at all other retailers

Black by Rose at Amazon US

Black by Rose at Amazon UK

Black by Rose at Amazon worldwide

Black by Rose at all other retailers

I also want to thank you for your support in launching Eddie’s new short story, The Note. In just over two weeks, it has 108 reviews in the US, and 91 in the UK, both with a staggering 4.8 average.

It blazed a trail right into the top of the Hot New Release chart in the UK and the US on the day it was launched, 5th May. And it’s still in that chart today. It has some wonderful reviews too and has really struck a chord with readers worldwide.

I wasn’t going to give notice of its price increase, but I think it only fair, especially since we have an influx of new members to the Reader’s Group recently.

Without doubt this has been one of the best book launches I’ve ever had, and the book wouldn’t have been so very popular without your help, thank you!

The Note is exclusive to Amazon and is available in Kindle Unlimited.

If you don’t already have The Note in ebook, now is your chance to add this to your weekend reading list while it’s still less than a dollar/pound, and see why a top 50 reviewer is calling The Note one of the most enjoyable crime thrillers he has read.

The Note at Amazon US

The Note at Amazon UK

The Note at Amazon worldwide

Have you heard of The Kindle Storyteller? It’s a competition run in the UK by Amazon and is open to newly published stories until 19th May. I’ve entered The Note but it could do with your help to get it recognised by the judges.

Reviews play a very important part and so I’d ask that if you’ve read The Note could you please leave a review here and just scroll to ‘Write a customer review’. It doesn’t have to be a long review, just a line or two, and will make all the difference.

If you’re kind enough to leave a comment on any of the Amazon sites after having read The Note, you will be entered into a draw to win one of two signed paperback copies. I’ll publish the winning comments (drawn by Ellie, my two-year-old daughter) in the next newsletter and will ask the winners to get in touch by email with their postal address within two weeks from the date of the newsletter. Good luck, and a sincere thanks for your support.

Last month was very special for me. I was awarded a Long Service medal by West Yorkshire Police for 20 years’ as a CSI (it’s actually 21 years now!). I never thought I’d make it this far, and if I’m honest it doesn’t seem 20 years since I joined up – that’s how much this career eats away at life. It’s been a tremendously rewarding time, and I feel very proud to work for UK law enforcement. 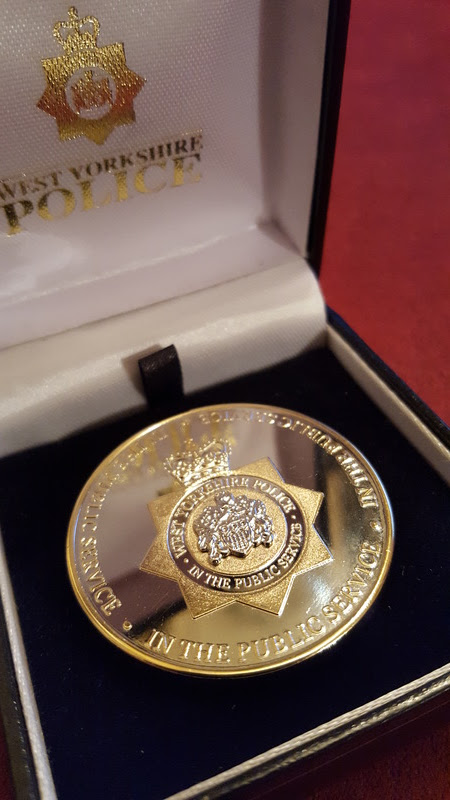 I’ve been trying to find a photograph of my first days in the service, but it looks like my computer ate them all!