Here we continue the short series of blog posts that endeavour to share how I write. It’s not meant to be a classroom affair, nor is it ultra analytical; it’s meant to be a little informative and perhaps a bit of fun. Each heading is a ‘fuzzy’ heading because the essence of writing is not easily broken down into true segments; each merges into the other.

At the beginning of my career (I’m allowed to call it that, right?), I panicked a lot. After reading a book, I wrote like the author had. For example, when I finished The Stand, my authorial voice grew an easy American twang that I simply couldn’t break free from. Same with Bernard Cornwell’s books – I developed a rich English slant that really wasn’t ‘me’ at all. On occasion though, especially with the American twang, it had the effect of catapulting my writing forward at great speed, and I soon realised why. 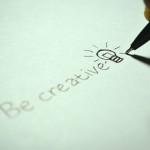 I was trying too hard to sound authorly, and using someone else’s voice allowed me to break away from my own inhibitions and just write – and just enjoy writing. It was faster, flowed better, read easier, and made more sense.

This realisation hit me half way through the second book of the first trilogy: Stealing Elgar. You won’t know it because it’s been edited a thousand times since, but A Long Time Dead was stifled, it read like a series of bullet points; it had no flow. In Elgar, I made the conscious connection between my mind and my writing voice – it was almost something physical, something I could feel happening. 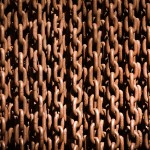 artificial constraints that I’d chained myself up with. The style you read in today’s Eddie Collins books is my style. It isn’t copied from anyone. It’s mine. And it comes to me as easily as breathing; I wrote Black by Rose in about five months. Its only edit was correction of typos, and a quick polish or two – aside from making sure there were no chronological or continuity errors of course. What you read there is almost precisely how it came out the first time round.

And here’s a little tip that might actually help! I believe there are four levels of thinking (I hope to write a blog about this a little later), and when you’re immersed in Level 3 thought as you construct your story, have a go at listening to music that best reflects the mood of the scene you’re writing. I promise, if you’re struggling to achieve the authenticity that the scene deserves, this really does work. If I want Eddie to be downright nasty, rude, or even if I just want him in a strop, I listen to a bit of Ozzy Osbourne, or AC/DC, or Halestorm. 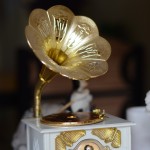 My latest phonograph for the best tunes

If on the other hand, I’m writing a thoughtful, emotional scene, maybe one where – if this was a film you were watching – you’d shed a tear or two, play something mellow, something ‘deep’ (we’re in Level 3 thinking mode here – ‘deep’ is a pre-requisite!), which for me includes Enya (laugh and I’ll poke you in the eye!), some old Queen (no, not some old queen, read it again), a little Taylor Swift (just discovered her, some good stuff in there)… you get the idea.

Of course if I’m not struggling, then I prefer silence every time.

I once tried listening to some classical music for the triumphant and uplifting feeling it can generate, but I failed to get hooked on it. That’s perhaps because I spent most of the evening listening to five-second samples of it, searching for the one that would carry me away. They all sound the same in five-second sound bites so I gave up.

So that’s the theory of my writing. What about the logistics? What happens when I get stuck?

I only need ask myself one question: what would the character do in this situation? Okay, scratch that – I ask myself this one too: what would be the most realistic way that this crisis would end? Occam’s razor: “Entities must not be multiplied beyond necessity.” In other words, choose the simplest path.

In this instance, I outline the problem, and from it draw a series of lines radiating from its centre. At the end of each line, I summarise what could happen. From this summary I extend the line to include whatever knock-on effect that particular action would initiate. 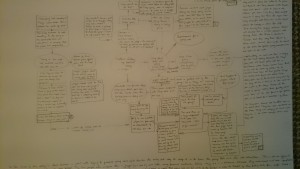 A flow chart from Black by Rose

Eventually, I arrive at two possible paths in which to proceed (I suppose this section harks back to the Planning section), and I’d choose the one that I felt most attracted to emotionally, rather than the one that appealed to me through practicality. Emotion is the driving force of you and me, of your character and ultimately of your story. This then becomes what would happen, which in the final draft, becomes what did happen.

Okay, the logistics of my writing. I use a Logitech solar keyboard. I’ve been through a dozen or so keyboards since I began this writing lark, and this one is by far the best. It has a very short keystroke, a pleasing ‘tink’ when the key bottoms out, and is very attractive to the eye. I’m not one of those writers who trained to use a keyboard. I can type while not looking at the keys, but there’s a lot of red on the screen when I do, which doesn’t really bother me. 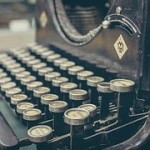 Instead, I look at the keyboard while I’m smashing away at the keys, glancing to the screen only occasionally when in full flow (but obviously reading what I’ve written when I come to a natural pause). As I’m typing this now, I realise that I don’t actually look at the keys at all; I look through them. I’m staring right now at the ‘t’ and ‘y’ keys and my fingers are just a raggedy blur to each side. This is me sinking into my story, looking at my character’s face, hearing his thoughts, and shrieking at what comes out of his foul mouth.

I find that if I watch the words appearing on the screen, then that’s what I’m doing: watching the screen. I should be observing my main man, and disappearing through the keyboard and absorbing the crisis he’s engaged with, which helps me a lot. It especially helps me with the character’s mood. I try to gauge the mood he’s in as a result of whatever crisis he’s lumbered with, and if I keep myself away from physical things by staring through the keyboard, I can maintain that mood or move it along to the next natural mood he’d encounter in a much smoother fashion.

As I mentioned above, when I do sit back and study what I’ve written, I can see the flow of words, and I can hear them. Do they sound right? Is that sentence clumsy? Is it really what I was thinking when I wrote it? I also see other things too, like a word I’ve used too often (okay, I’m a guilty of this – I’m not perfect!), or the very real fact that I’ve skirted around what I meant to say and have not made the point at all. 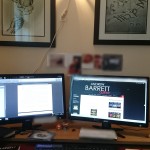 My desk, my home, aaaaah. 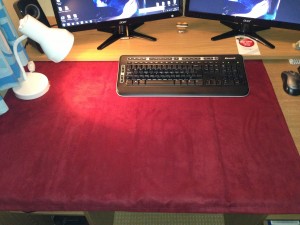 I try to keep myself away from the physical world around me while I type. I have two screens – one has the story I’m writing on it (always on the right hand screen), the other has the Chapter Profile. I have a keyboard that I feel comfortable with (if you wear your favourite slippers, they eventually disappear from your conscious mind, and that’s where I am with this keyboard), and I have a sheet of red velvet across the desk (thanks Kath!) that stops my arms sticking to the wood when it’s hot in summer, and stops them feeling the coldness of it in winter.

I have a lamp nailed to the wall above me. Its light shines at the ceiling and is diffused enough to cast an even pool of light over my desk. All around me doesn’t exist. My desk faces a wall where I have a few choice pictures pinned – but I rarely look at them. The blind over the window to my left is never open; I like the consistency of my artificial pool of light, and get quite cross when the sun comes through it, especially on a windy and cloudy day when the sunlight is weak then strong then weak…  I have a footstool under my desk for those moments of contemplation where I sit back in my chair and read the screen or immerse myself in deep thought – I want no pinprick of discomfort to pull me out of the story, I want no distractions.

When the neighbours are being noisy, cutting grass or whatever, they’re pulling me away from the story. I counter this not with music (or automatic gunfire from my roof-mounted sniper’s nest), but with a rainfall soundtrack turned up high enough to obliterate them. Sharp intermittent noises play havoc with my thoughts, but a constant drone, a washing machine for example, or my rainfall track, soothes me, and allows me a swift exit from those around me.

On my desk I have a 1966 sixpence (my birth year) which is the first coin I ever remember holding. I have a few spent 9mm shell casings, some heavily distorted lead from a shotgun slug, and a few rifle rounds alongside some gifts from special people – oddments to carry me away somewhere new.

As an aside, I hate new pages. I used to write my books longhand in an A4  pad.

And I would cram words onto each page simply because I hated turning over and starting on a new blank page. I could fit something like 800 words onto one single page. And it’s the same now that I use a computer. I’ll often continue on the same page when I begin a new chapter, just so I don’t have to see a blank page with the words Chapter Six (or whatever) waiting patiently for me to crack my knuckles and begin punching the keys. Maybe a psychologist could shed light on that one.