My Way – Part One

We’re talking here about writing, so all you smutty heads will be disappointed.

First of all, let’s start by injecting a little sobering and thought-provoking pep talk.

This is a short series of blog posts on how I go about my business of writing. I made up everything that follows! I have no more qualifications in creative writing than I do in Quantum Mechanics. This is all my opinion; it’s how I work, and the methods in this piece are those I’ve learned or have tried for myself. If you follow my advice and end up a penniless bum with nothing to your name other than a dream to write, then don’t try to sue me, for I too am a penniless bum with nothing more than a dream to write. If however, my advice leads you to great wealth and fame, please pop by for tea and biscuits. You’ll need to bring some tea. Oh, and some biscuits.

And for all you penniless bums out there clutching at your pencil and your writing pad – welcome brother; let us dream together.

Usually a scene will occur to me first and then I’ll grow a story onto it. It’s very organic, but a little scary as the end result can be monstrous. I think people call this technique and this style of writer, a ‘pantster’. I’m one of the few authors I know of who generally struggle to come up with ideas though. I suspect that’s because I like to have an idea plop into my head that’s fully formed – a whole story, in other words. And I’ll often dismiss ideas that do show themselves simply because they’ve been written about before, even if I know I could give the tale an original slant.

A lot of authors seem to have ideas occur to them all the time, even bits of ideas. That doesn’t often happen to me. If nothing plops into my mind, I begin prodding and poking at the box inside my head labelled Novel Ideas, but that never works out right. I can see the box closing tighter and tighter the more I growl at it. Only when I chuck away my prodding stick and walk off does it seem to relax and maybe open of its own accord.

But for me, coming up with a plausible idea is very difficult and often tedious. And I cry a lot in frustration. Sometimes I have moments of exceptional clarity where a very appealing idea will arrive, smartly dressed, and with a smile on its face. And each time this happens, something distracts me, and I turn away for a second or two and when I look again, it’s gone, a small cloud of dust where it once stood. Infuriating doesn’t cover it.

I am the worst planner in the world. I don’t plan. For Black by Rose, I formed the story around a robbery scene I had in mind, and then promptly got stuck. So I made a flowchart on a sheet of A3 I had kicking about. It had all kinds of ideas branching off in all kinds of directions. There was a whole spectrum of ideas coming from that thing that ranged from impossible to improbable, and I basically drew a route through the whole page. That got me going again, but mostly I was winging it. 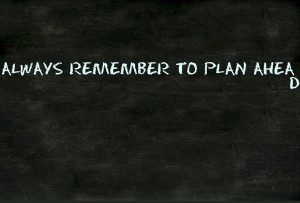 In The Third Rule I did do some planning, but only the background. I planned it in minute detail so I knew exactly what I was talking about. All the laws and policies I’d created regarding The Rules were fixed in place in my head and I could just get along and write the story (I learned a lot about British law, the judiciary, and politicians along the way). I kept an A4 bound book of all my notes too so I could refer back to it when I needed to, and it helped me eke the story forward too, letting me know what scene should come next. But there was still no forward planning.

In Stealing Elgar, I also kept a note book. It all happened a long time ago, but I do recall simply going down a list of the scenes I needed to write and ticking them off. I look back on that book with envy, wishing I could do that these days. This made for some really quick writing, and it’s a technique I’d like to employ again.

But in every modern book that I’ve written on my computer, I create a file which I call the Chapter Profile. 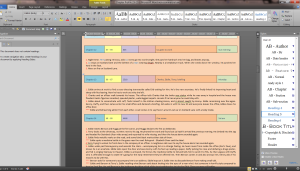 It’s headed with a chapter number, page count, word count, one-sentence heading, and day/time the scene takes place. Below this heading I write a brief summary of what occurred in this scene, who was present, what the important aspects of it were so I can refer to it any time. Keeping this up to date is vital. In Sword of Damocles, I used this extensively to help me rearrange all the chapters and all the scenes within the chapters to make sure it was chronologically correct. It helped me find inconsistencies and continuity errors – well, some of them. And then, it also helped me equalise the chapter lengths and so avoid some 50-page chapter.

Alongside the active document, I like to use the navigation tool on Word. It’s invaluable and I cannot now write without it being there. It’s another chapter marker. The text box though is very short but I like to get as much information into it as I can. Then swapping chapters or scenes around is a doddle: drag and drop.

All of these aids are great to refer to when making up the story, propelling it forward, or correcting it afterward, but they’re all retrospective aids. I still don’t know how to actually plan out a story.