Me and my Critic

I remember saying it took many years for me to open up to my colleagues and tell them I was a writer. That was partly because I’m still shy of mentioning that little fact, but mostly it was because I thought my writing was shit. God help me if anyone I knew actually got hold of a copy!

When I began writing in the 80s, I wrote for me. Of course I submitted my stories but they earned so many rejection slips that I could’ve decorated my bedroom in them. When you get knocked back so often, it’s only natural that you begin thinking you’re no good at this. I never thought I would get sucked up by a big publishing house and find myself on a bestseller list somewhere, but I did expect to get picked up (oh, you naïve prick, you!). Well, at least I hoped I would.

And when I didn’t, it began to hurt. It hurt so much that I shrank inside myself and wrote my stories just for me – which was fine; I loved creating worlds and people. My ‘shrinking’ though led to my inner critic growing. 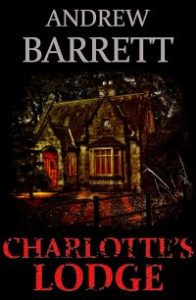 When I finished my very first serious book (the third book I ever wrote), I crafted a note that I pinned to my wall in front of my typewriter. It said something like: If you think you can’t write, read Charlotte’s Lodge. It was my own little motivational poster before motivational posters were invented!

But it didn’t work. I was crippled by the first clause: ‘if you think you can’t write’. That’s exactly what I did think, and seeing as I got very little support from those around me back then, it was hard to knock that bastard critic off his perch. He’d cross his legs, stick his nose in the air, close his eyes and fold his arms. And then he’d shake his head at me.

I hated that smug little bastard!

But I kept on reading and I kept on writing. If you’ve never tried writing a story, you should because it feels AMAZING. And it was that feeling that kept me going.

I published Charlotte’s Lodge on Amazon in 2011 or 12. I pulled it pretty quickly because it was obviously shit, and the few reviews it gained told me so. Imagine my nerves then at publishing A Long Time Dead. My arse was twitching like a rabbit’s nose. 150k copies later (or thereabouts – I never bothered keeping score), it seems that Dead wasn’t so bad after all.

But how did I know this? 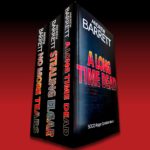 A lady called Kath Middleton read and enjoyed A Long Time Dead, and then Stealing Elgar and then No More Tears. Get that – she enjoyed them! The smug little git on my shoulder opened his eyes, unfolded his arms. Ha, started to take notice, huh?

But then the pressure was on. I had half of the next book – The Third Rule, in the bag before a friend pulled me away to write scripts for a few years. Eventually, when the arse fell out of my life around 2012, I crawled back to The Third Rule and typed with shaking fingers. Could I produce something good, or had I lost my touch? I finished it, but I had no idea if it was any good. I know how that sounds, how can you not know if something’s good or bad? I don’t know, except telling yourself one thing or another is you just playing tricks on yourself; but when you hear it from someone else it starts to mean something. When you hear it from hundreds of people, you dare to wonder if it’s possible.

I can write. I can actually write!

I see the smug git has fallen from his perch at last.

But… do you believe in fate? The gods? Well, I’m a little superstitious at times. If I admit to myself that I’m any good, someone up there will bloody well see to it that I’m not. So, it’s safer to say that I’m mediocre, and that I’m still learning. And anyway, if I were to admit that, would it make me more complacent? I don’t think there’s any harm in trying to get better – and so that’s what I do with each new book. Honestly, I’m learning all the time, and I actually think there’s room enough on my shoulder for that inner critic to get comfy and read my stuff because without him, I’d be still churning out Charlotte’s Lodge. So I don’t ignore him – we work together.

But that’s not all. 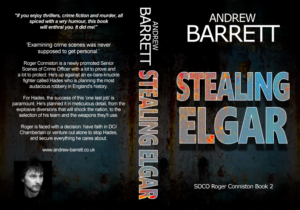 I’ve said it dozens of times. Voice. I got mine half way through writing Stealing Elgar. Of course it sounds crazy, I’m not stupid. But until then, I was writing in the voice of the last person I’d read. Seriously, I had to stop myself reading King because I didn’t want an American influence to creep into my writing. It still doesn’t take me long to think in an American voice if I’ve just watched a movie. I would write in a style not unlike that last author I read and I couldn’t get out of it. I would also worry that King wouldn’t write that character like this, or Herbert wouldn’t write this scene like this… I was paranoid!

I think I put myself under a great deal of pressure, because one day I felt something somewhere inside me click – yes, physically (honestly!). From that moment onward, I didn’t give a shit about anyone else’s style. I wrote like me. I hit upon my own way of telling stories and I’ve been writing like that ever since. And once you have your own ‘voice’, it feels wonderful, like a comfy pair of shoes, or like sleeping in your own bed again after being away for a week.

And now, when I’m punching the keys, immersed in constructing a scene, or trying to figure out how this character would react, it actually feels like rediscovering something beautiful that I thought I’d never see again – a favourite country lane, or a place on the sofa beside my old man – security, I suppose. I think people call it ‘the zone’. 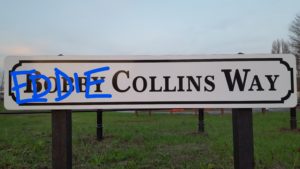